The Literature & Culture of the American 1950s

Michael Meeropol Statement on Ethel and Julius Rosenberg (25 July 1995)
“By Robert and Michael Meeropol, sons of Julius and Ethel Rosenberg, as an initial reaction to the release by the National Security Agency of the ‘Venona’ documents purporting to prove that their parents were indeed – Soviet spies.”

Silja J.A. Talvi: Son of the Rosenbergs (June 18, 2003)
“Fifty years after the most politicized execution of the 20th century, Robert Meeropol carries the torch of dissent. And 2003, he says, is looking more like 1953 every day.”

The Rosenberg orphans and the power of radical history. By Annie Levin (11 January 2021)
“Orphaned after their parents were executed for espionage, the story of the Rosenberg boys is one all Americans should know.”

Robert Meeropol: “What we need to do is speak out” (June 20, 2003)
“The son of the Rosenbergs reflects on the tenor of the times 50 years after his parents’ execution.”

The Rosenbergs were executed for spying in 1953. Can their sons reveal the truth? By Hadley Freeman (19 June 2021)
“Ethel and Julius Rosenberg were sent to the electric chair for being Soviet spies, but their sons have spent decades trying to clear their mother’s name. Are they close to a breakthrough?”

Heir to an execution (2004)
“This deeply personal feature-length documentary chronicles filmmaker Ivy Meeropol’s journey to come to terms with the lives and deaths of her grandparents, Julius and Ethel Rosenberg, who were executed as traitors in 1953 after being accused of relaying the secret of the atomic bomb to the Soviet Union.”

Elizabeth Schulte: The trial of Ethel and Julius Rosenberg (Issue 29, May–June 2003)
“Over the last decade, in an effort to rehabilitate the McCarthyite era and prove the guilt of the Rosenbergs, right-wing academics and ‘spy experts’ – such as historians John Earl Haynes and Harvey Klehr – have made much of the Venona Project transcripts released by the CIA in 1995.”

Is there anything more to say about the Rosenberg case? By Staughton Lynd (Vol.62, No.9, February 2011)
“In their book, Venona: Decoding Soviet Espionage in America, John Earl Haynes and Harvey Klehr assert that Julius Rosenberg was one of an estimated 349 Americans who had a covert relationship with Soviet intelligence agencies.”
See also Correspondence: Not naming names: Julius Rosenberg’s decidedly political decision. By Michael Meeropol (Vol.62, Issue 11, April 2011).

Michael and Robert Meeropol: Exonerate our mother (August 10, 2015)
“The newly released 46-page transcript [from grand jury] ”” along with previously released testimony and other records ”” demonstrates conclusively that our mother was prosecuted primarily for refusing to turn on our father.”

Robert Meeropol: Strange convergence (April 9, 2015). ” … here from his blog about what would have been his mother’s and singer Billie Holiday’s 100th birthday.” With link to video with Robert Meeropol about the song ‘Strange Fruit’.”

Robert Meeropol: The final week of my parents’ lives (June 24, 2009)
“This year, in the days leading up to the anniversary of his parents’ death on June 19, Robert wrote this diary, remembering what happened each day 56 years ago.”

Elizabeth Schulte: Executed to send a message (September 30, 2008)
“New attention on the case of Julius and Ethel Rosenberg, executed as so-called ‘atomic spies’, underlines the government’s cruel abuses of power.”

Elizabeth Schulte: The execution of Ethel and Julius Rosenberg (June 20, 2003)
“It is 50 years since the execution of the Rosenbergs – a cold-blooded murder committed by the U.S. government in the name of the Cold War fight against communism.”

Louis Proyect: Atom spies (September 12, 2008)
“Imagine how painful it is to hear now that this skunk [Ronald Radosh] was more right than the Schneirs. After reviewing the Venona documents that became available after the collapse of the USSR, the Schneirs acknowledged that Julius Rosenberg was guilty but that his wife was not.”

Fred Mazelis: David Greenglass, star witness against the Rosenbergs, dies at 92 (16 October 2014)
“David Greenglass, the last surviving major figure from the notorious espionage case that led to the executions of Ethel and Julius Rosenberg in 1953, has died at the age of 92.”

Peter Daniels and Bill Vann: 50 years since the execution of the Rosenbergs (19 June 2003)
“How did the Rosenbergs become the targets for a vindictive legal lynching? To understand their fate one must review the political beliefs that inspired their activities.” 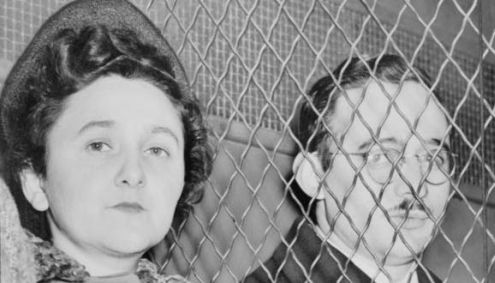 NOVA Online: Secrets, Lies, and Atomic Spies (PBS)
“The National Security Agency called a press conference in July 1995 to announce the release of forty-nine intercepts, dubbed the Venona papers, that dealt with the case of the Rosenbergs …”

Venona Intercepts: The September 21, 1944 cable: The Rosenbergs and the Greenglasses

Rosenberg Fund for Children (RFC)
“The RFC was founded by Robert Meeropol, who was orphaned at age six when his parents, Ethel & Julius Rosenberg, were executed at the height of the McCarthy Era.”
With documents about The Rosenberg Case