Tekst fra ovenstående bog om Marion-lynchingen: [picture # 27]:
The following account is drawn from James Cameron’s book, A Time of Terror:
Thousands of Indianans carrying picks, bats, ax handles, crowbars, torches, and firearms attacked the Grant County Courthouse, determined to “get those goddamn Niggers”. A barrage of rocks shattered the jailhouse windows, sending dozens of frantic inmates in search of cover. A sixteen-year-old boy, James Cameron, one of the three intended victims, paralyzed by fear and incomprehension, recognized familiar faces in the crowd-schoolmates, and customers whose lawns he had mowed and whose shoes he had polished-as they tried to break down the jailhouse door with sledgehammers. Many police officers milled outside with the crowd, joking. Inside, fifty guards with guns waited downstairs.

The door was ripped from the wall, and a mob of fifty men beat Thomas Shipp senseless and dragged him into the street. The waiting crowd “came to life”. It seemed to Cameron that “all of those ten to fifteen thousand people were trying to hit him all at once.” The dead Shipp was dragged with a rope up to the window bars of the second victim, Abram Smith. For twenty minutes, citizens pushed and shoved for a closer look at the “dead nigger”. By the time Abe Smith was hauled out he was equally mutilated. “Those who were not close enough to hit him threw rocks and bricks. Somebody rammed a crowbar through his chest several times in great satisfaction.” Smith was dead by the time the mob dragged him “like a horse” to the courthouse square and hung him from a tree. The lynchers posed for photos under the limb that held the bodies of the two dead men.

Then the mob headed back for James Cameron and “mauled him all the way to the courthouse square”, shoving and kicking him to the tree, where the lynchers put a hanging rope around his neck. Cameron credited an unidentified woman’s voice with silencing the mob (Cameron, a devout Roman Catholic, believes that it was the voice of the Virgin Mary) and opening a path for his retreat to the county jail and, ultimately, for saving his life. Mr. Cameron has committed his life to retelling the horrors of his experience and “the Black Holocaust” in his capacity as director and founder of the museum with the same name in Milwaukee, Wisconsin. Under magnification, one can see the girls in this photo clutching ragged swatches of dark cloth.

After souvenir hunters divvied up the bloodied pants of Abram Smith, his naked lower body was clothed in a Klansman’s robe-not unlike the loincloth in traditional depictions of Christ on the cross. Lawrence Beitler, a studio photographer, took this photo. For ten days and nights he printed thousands of copies, which sold for fifty cents apiece.

Textbox picture # 28:
A short man with a Hitler moustache points to the body of Abram Smith. On his inner arm is tattooed the bust of an Indian woman.
Indiana historians and researchers are interviewing the reluctant Marion citizens old enough to remember the lynching of Thomas Shipp and Abram Smith. One of their goals is to identify the individuals in this disturbing photo, not to demonize them, but to better understand the factors that produced such a violent and tyrannical era. No one knows who Bo was. 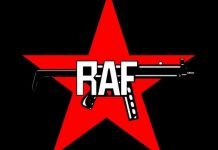 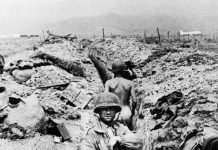 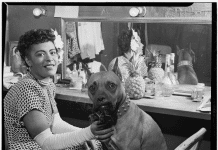